Highlights Of Arctic Passion At The Arctic Circle Assembly 2022 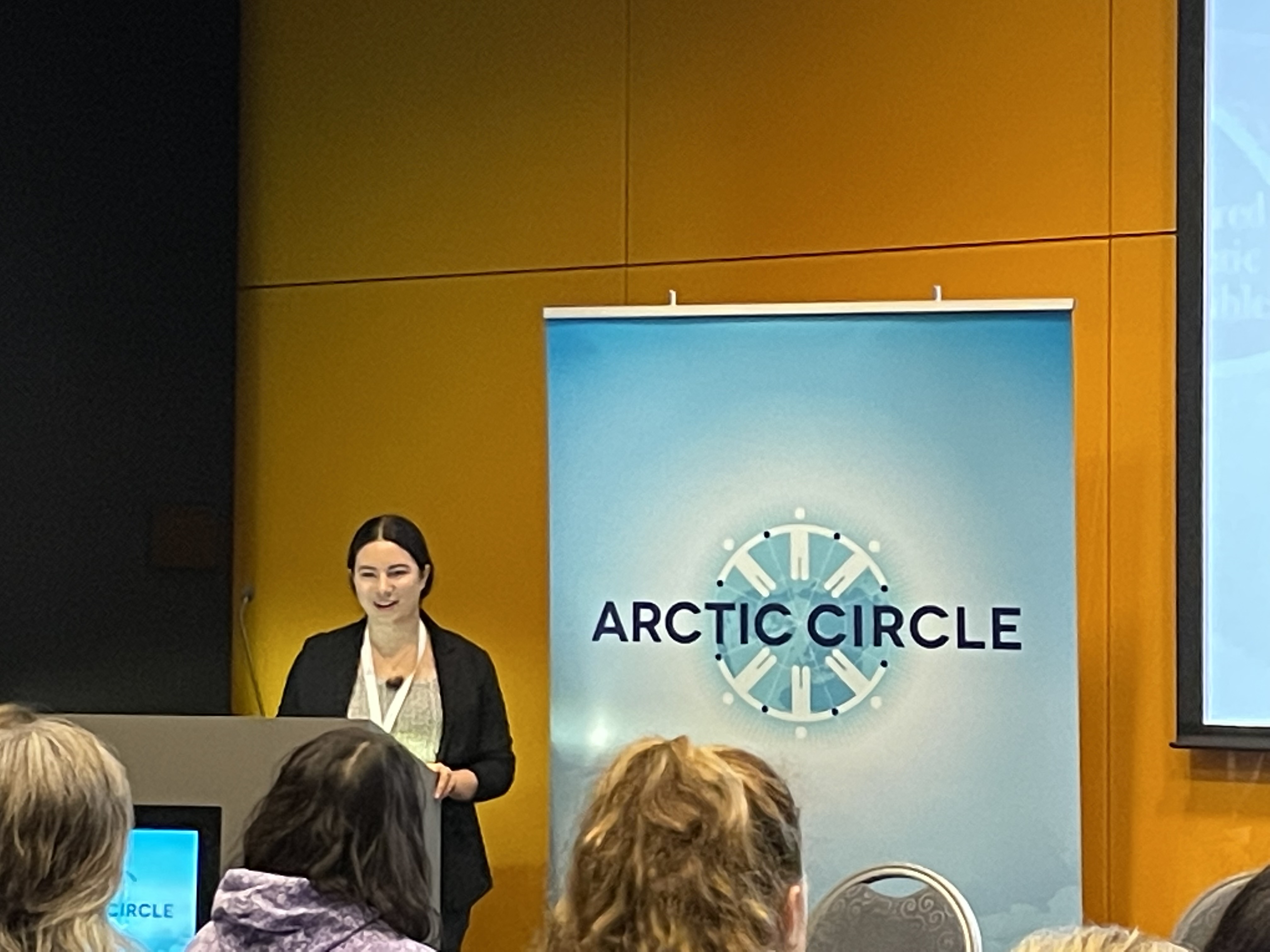 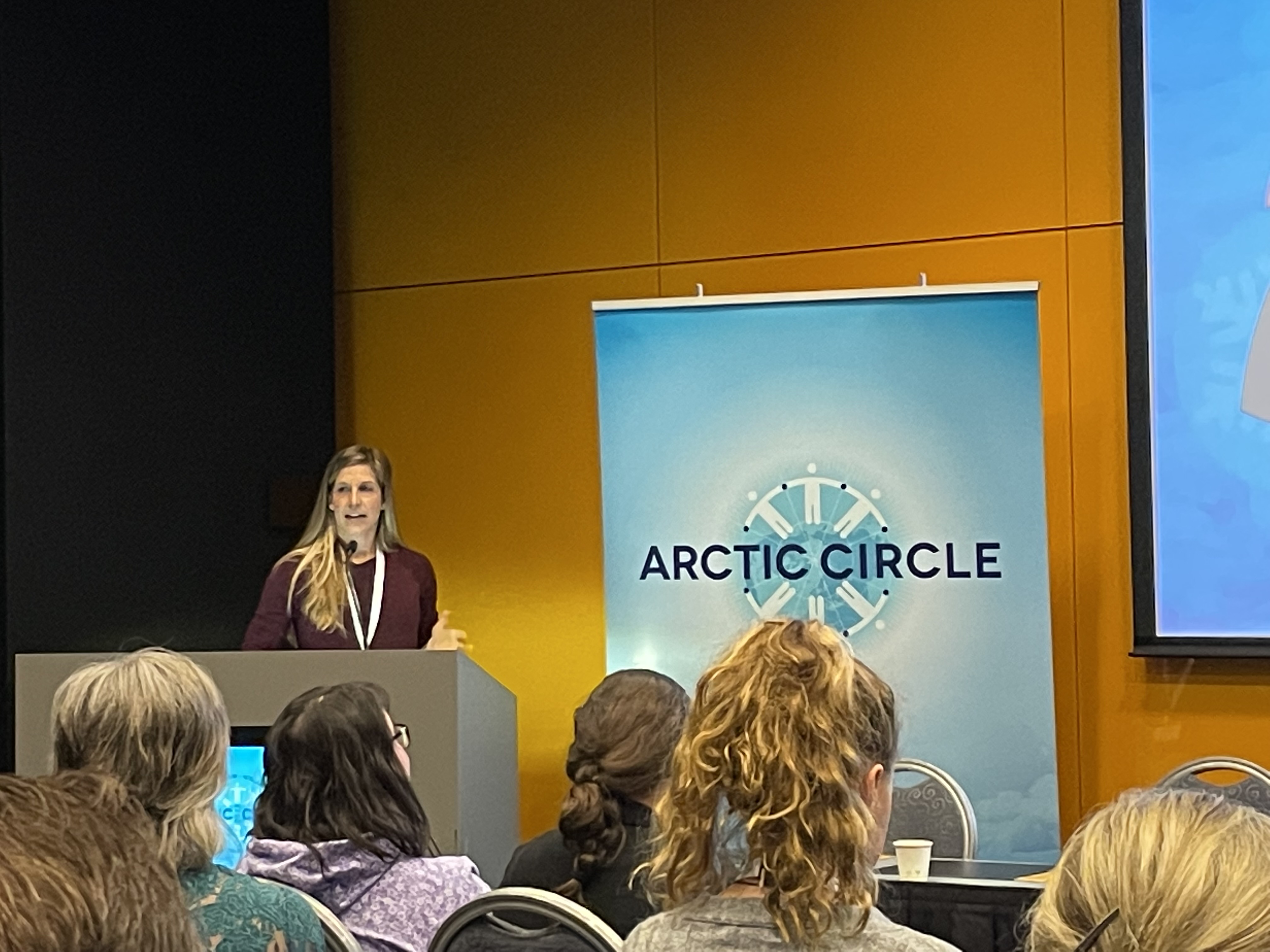 Introduction of the speakers for the session; Alice Bradley and Laura Divine. Photos: Lisa Grosfeld 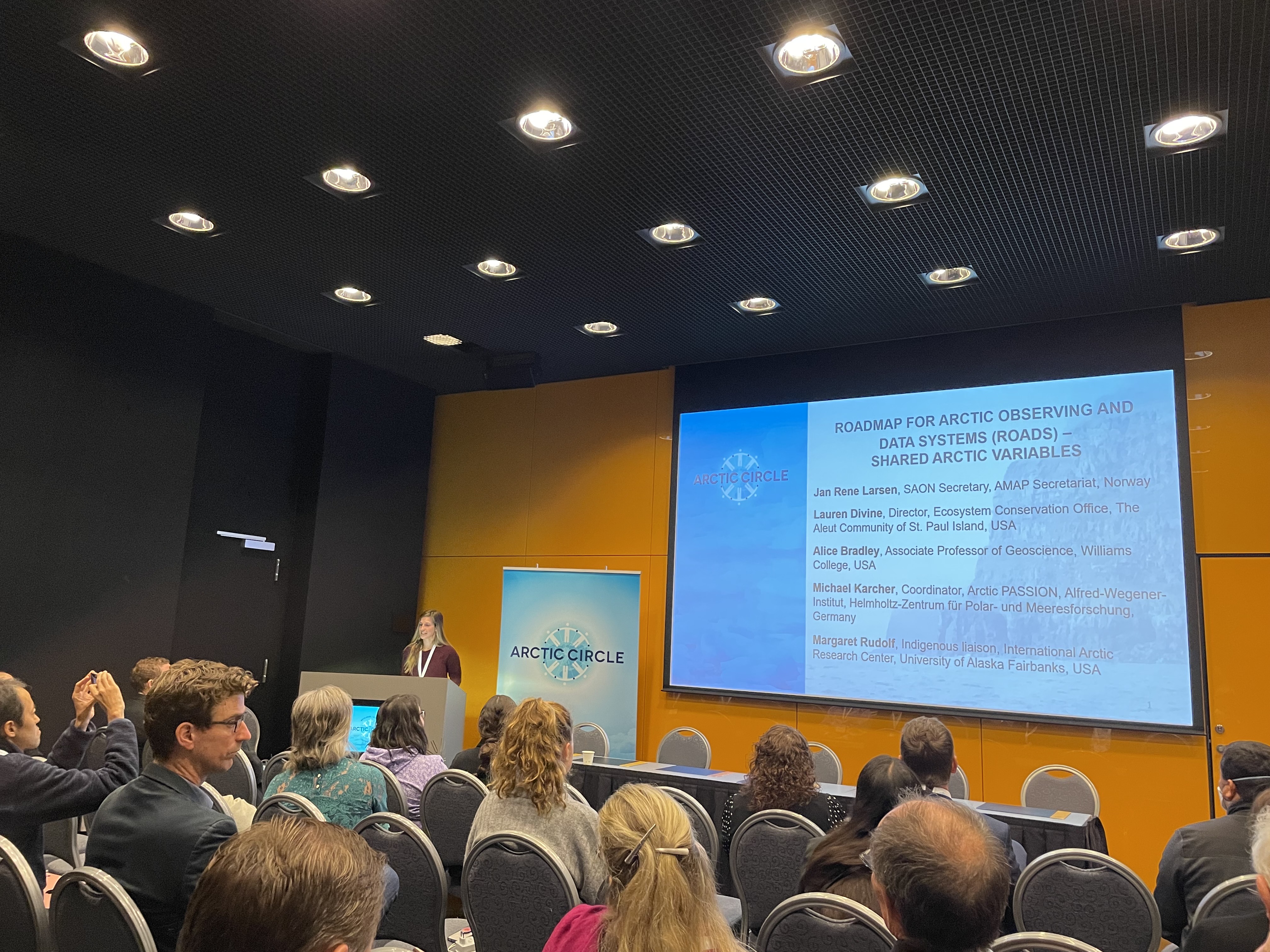 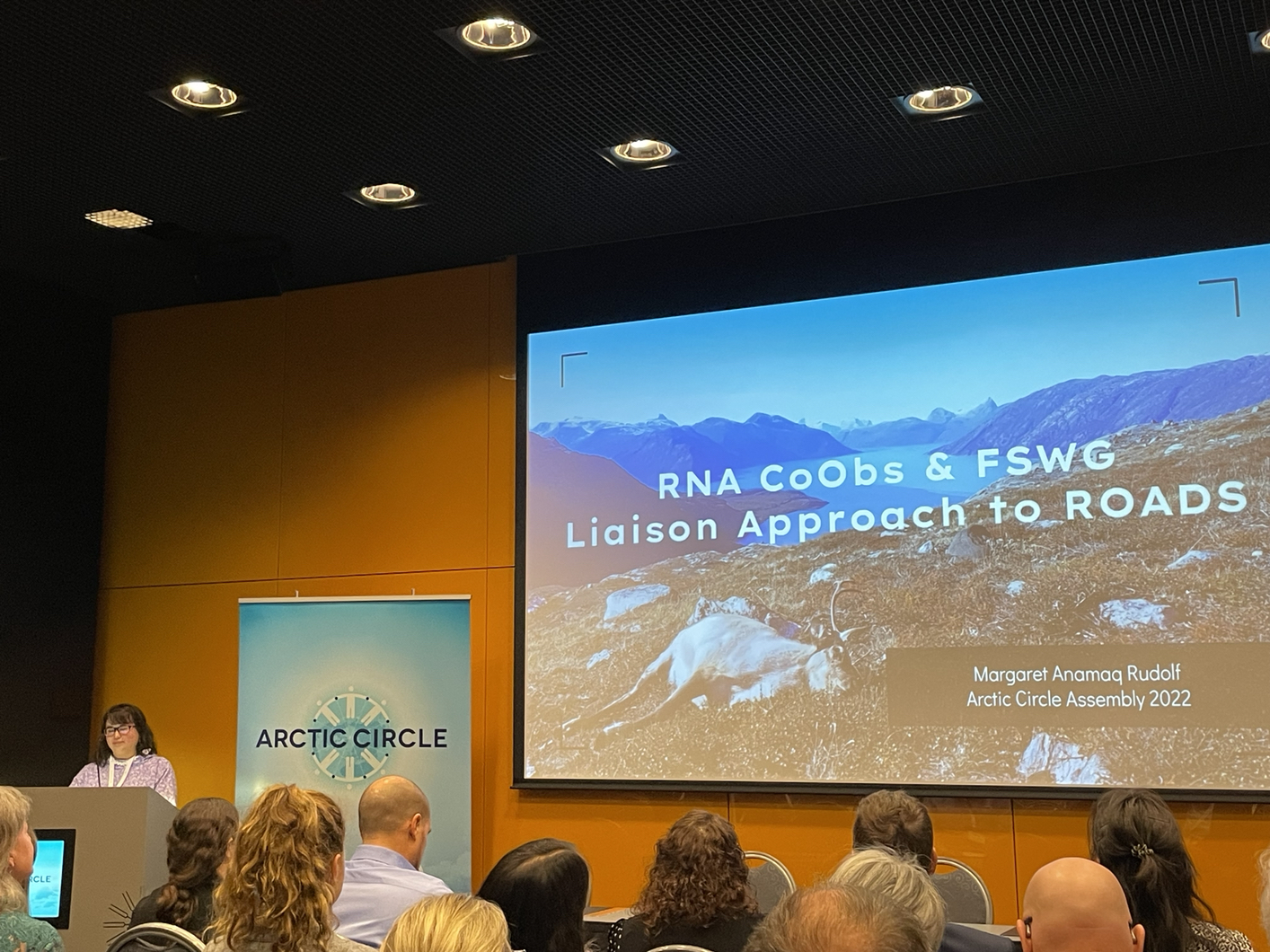 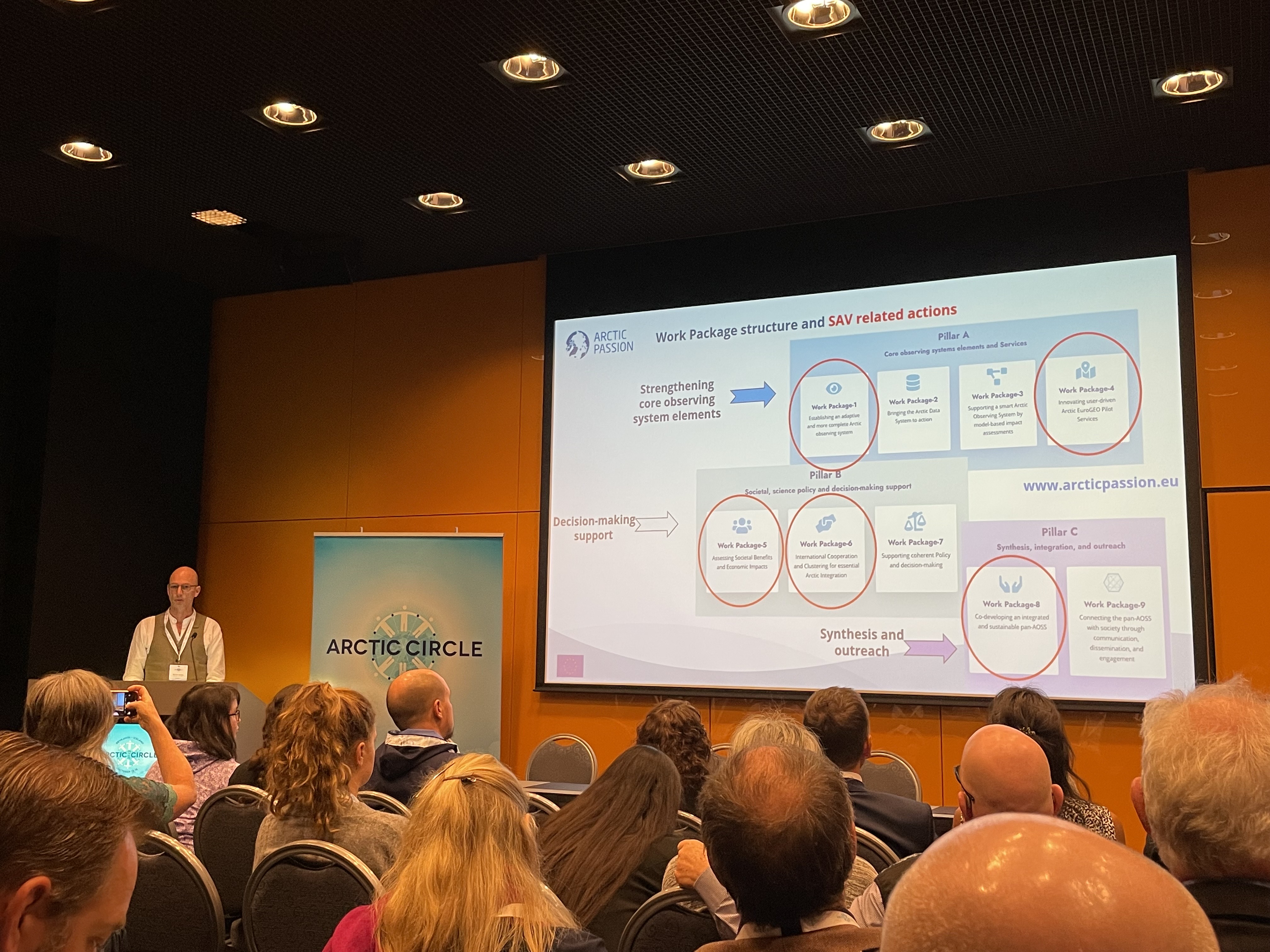 Lauren Divine, Director of the Ecosystem Conservation Office, the Aleut Community of St. Paul Island, USA, talked about the SAON ROADS process and the concept behind the Shared Arctic Variables (SAVs) – “better coordination through collaboration”. Currently they are working on a guidance document for expert panels and a framework document for the SAVs. Alice Bradley, Associate professor of Geoscience, Williams College, USA, elaborated a bit more about the Shared Arctic Variables, what they are and how the process is planned.


Shared: Co-design + Partnerships
Arctic: Phenomena and constraints in the Arctic
Variables: Observable phenomena that are critical for characterizing a system and its changes.

The SAVs should be most valuable for the groups involved. Information users are Indigenous communities, local and regional governments and scientists. With a co-design approach, satellite observations, scientific measurements and Indigenous knowledge should be combined. A core group shall start to convene for these topics first and will be enhanced by interested and relevant persons along the process.
Michael Karcher, Scientific coordinator of Arctic PASSION at AWI, explained how Arctic PASSION is supporting the SAON ROADS team in developing the SAV process during our project lifetime. In Arctic PASSION, our partners from AMAP and SIOS are leading these efforts and co-developing the SAV topics 'Permafrost (Living on frozen ground)', 'Wildfires' and 'Sea Ice' with our related Pilot Services 2, 4 and 6 and Indigenous and local experts. We see the SAV process and the expert panels that will be organized as having a high potential for empowerment and a support of equity for Indigenous and local Arctic inhabitants.

Last but not least, Margaret Rudolf, Indigenous liaison, International Arctic Research Center, University of Alaska Fairbanks, USA, talked about the work the US-based project RNA CoObs is doing, focusing on equity for Indigenous Peoples, co-production of knowledge and Indigenous food sovereignty. She rose awareness about the differences between the approaches and backgrounds of Indigenous researchers and western natural scientists and the importance of the implementation of culturally-responsive co-production of knowledge, She also pointed out that building trust takes time but is valuable and needed for the whole process. 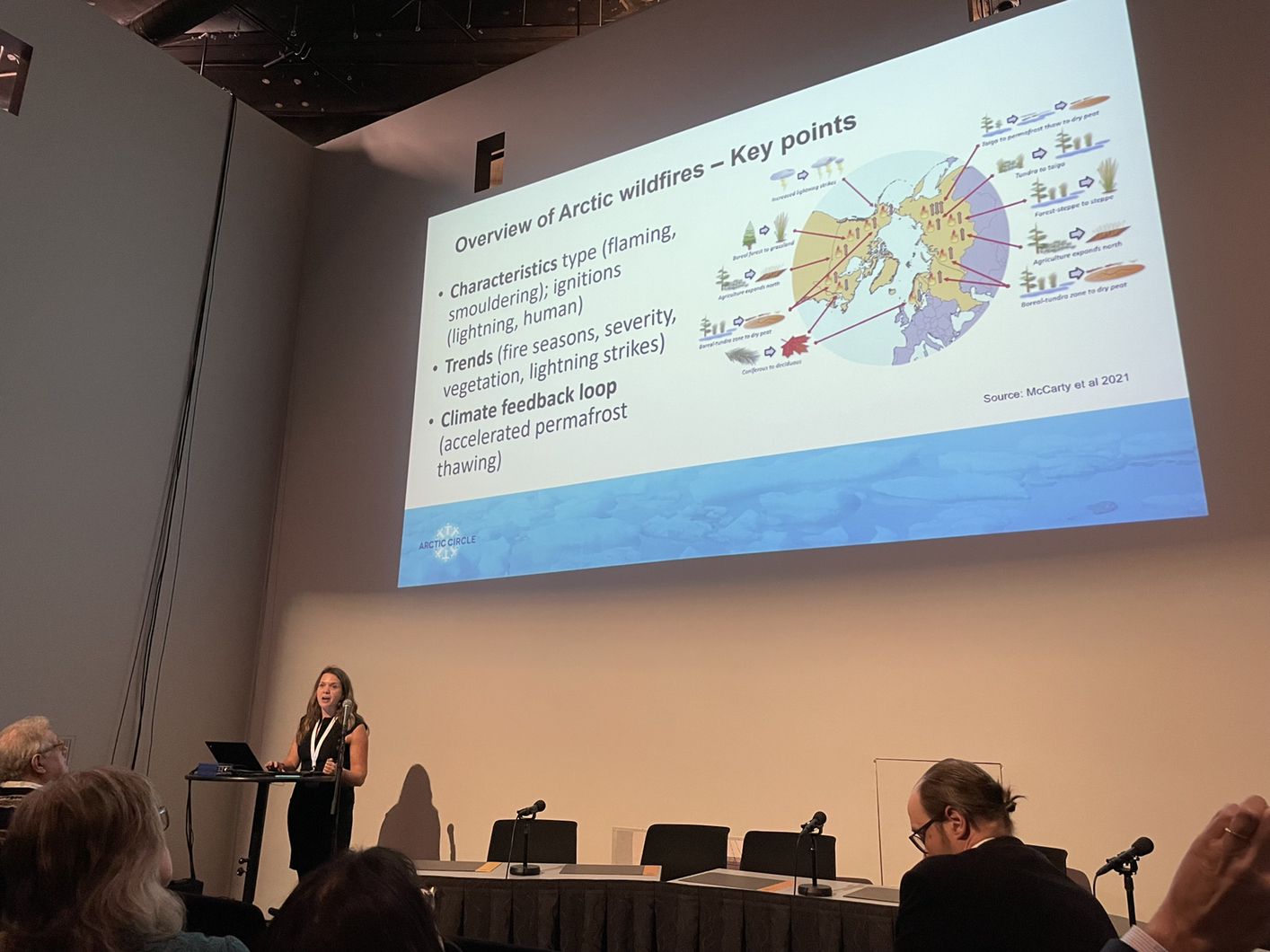 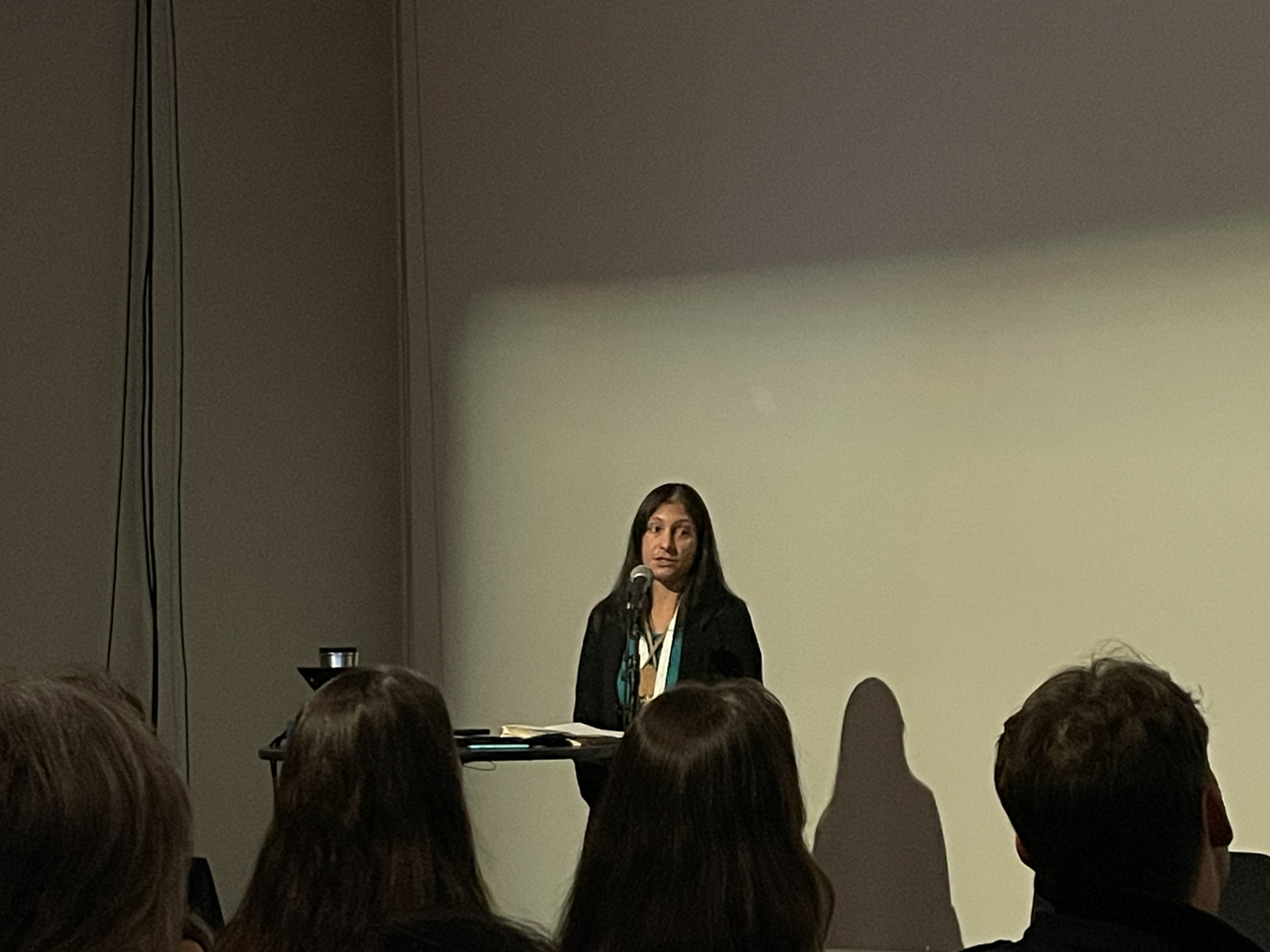 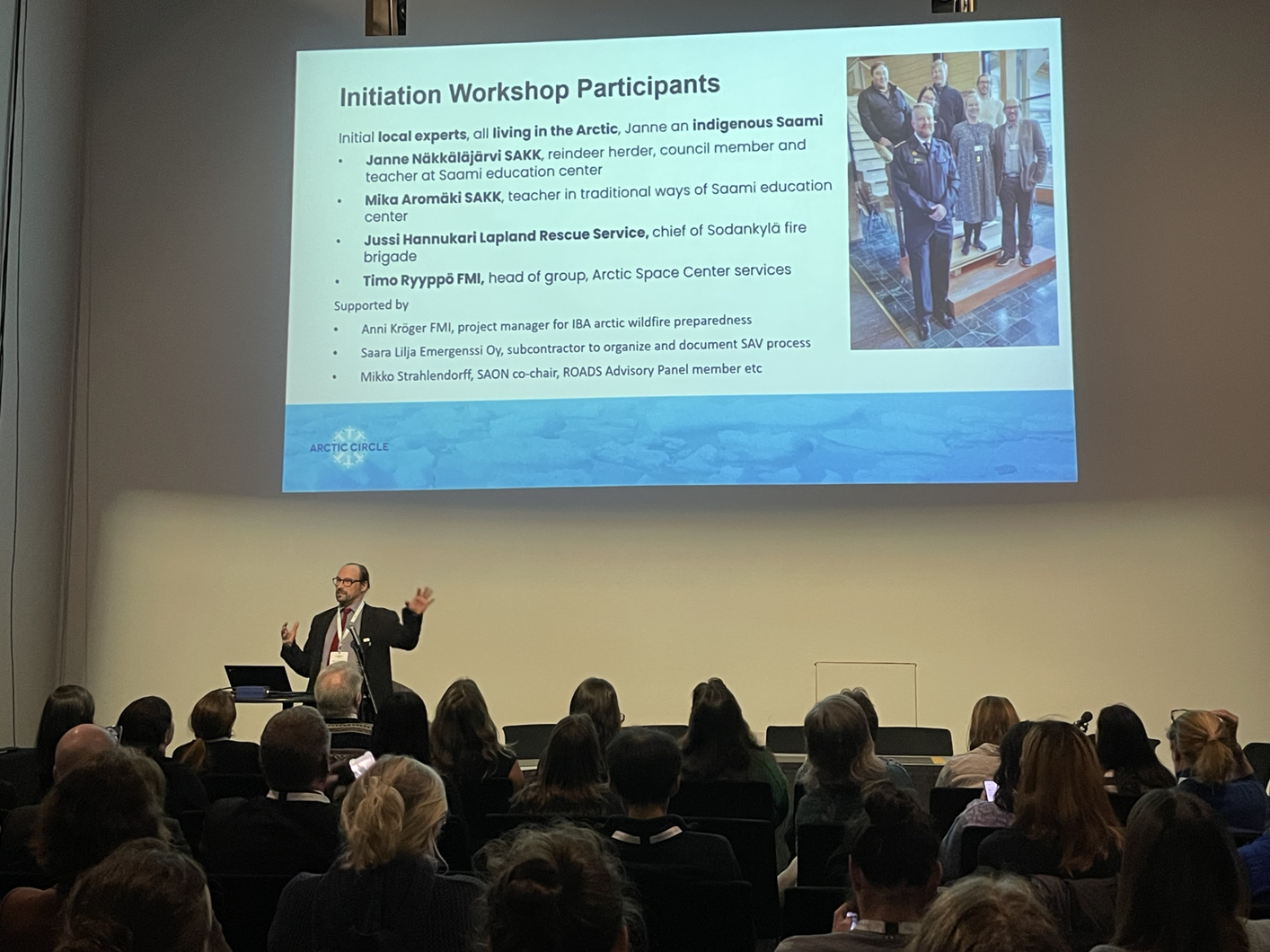 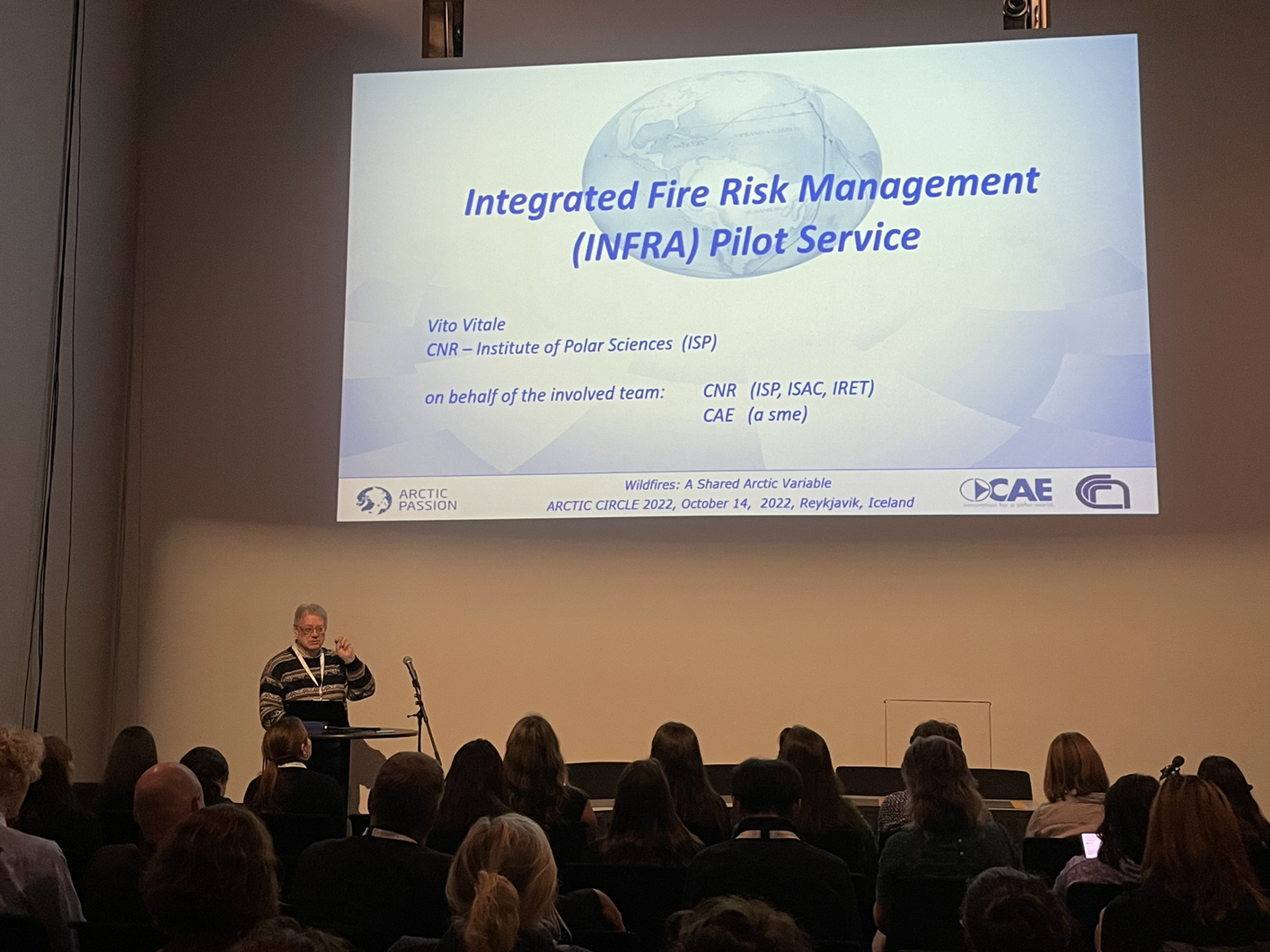 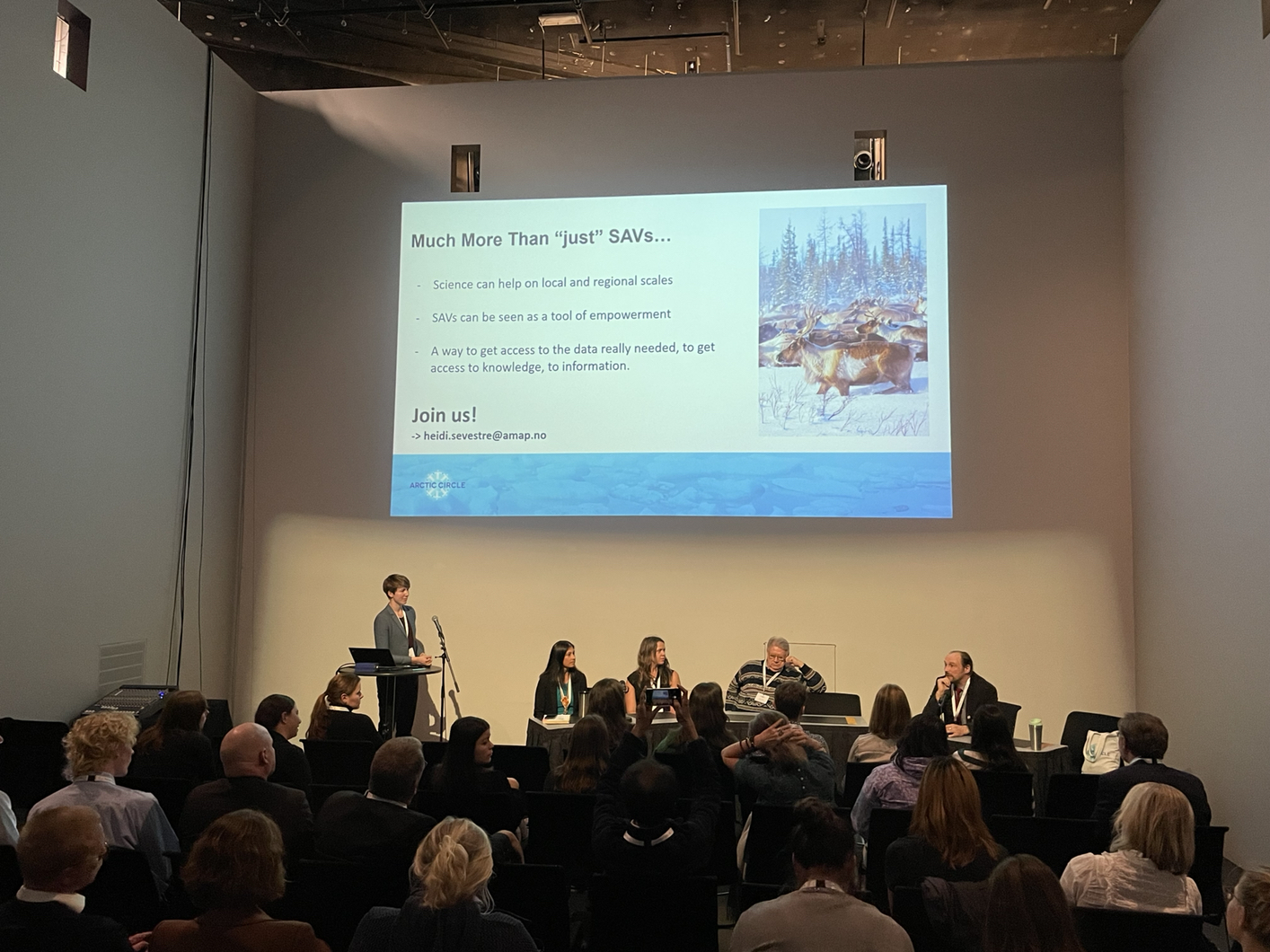 Adriana Ford, LeverhulmeWildfires Centre, UK, gave an overview about Arctic wildfires and their impacts on communities, as they affect directly on health, livelihoods, infrastructure, climate-led migration and indirect via climate feedbacks.


Delvin Fernandes, Gwich’in Council International, Canada reported on a CAFF project and the EPPR Wildfire Sharing Circle. She pointed out that Arctic fires are different in each area in how they affecting ecosystems and how they are handled differently.


Mikko Strahlendorff, Space Adviser, Finnish Meteorological Institute reported on a SAV Wildfire Workshop that was organized with a fire chief, reindeer herder, an expert in reindeer husbandry, an expert in arctic resilience cocreation and networking and scientists, as a Finnish contribution to the Arctic PASSION wildfire SAV. 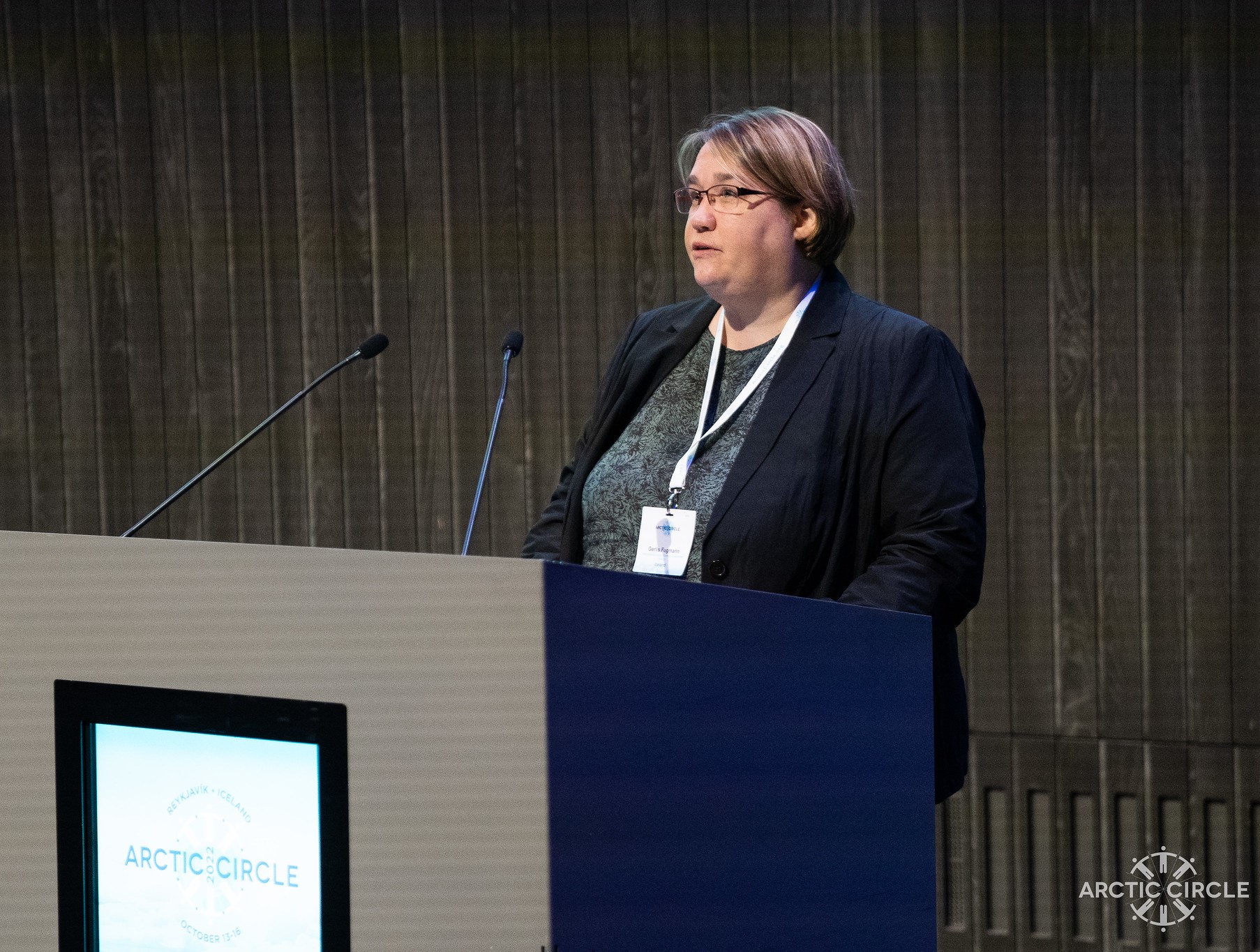 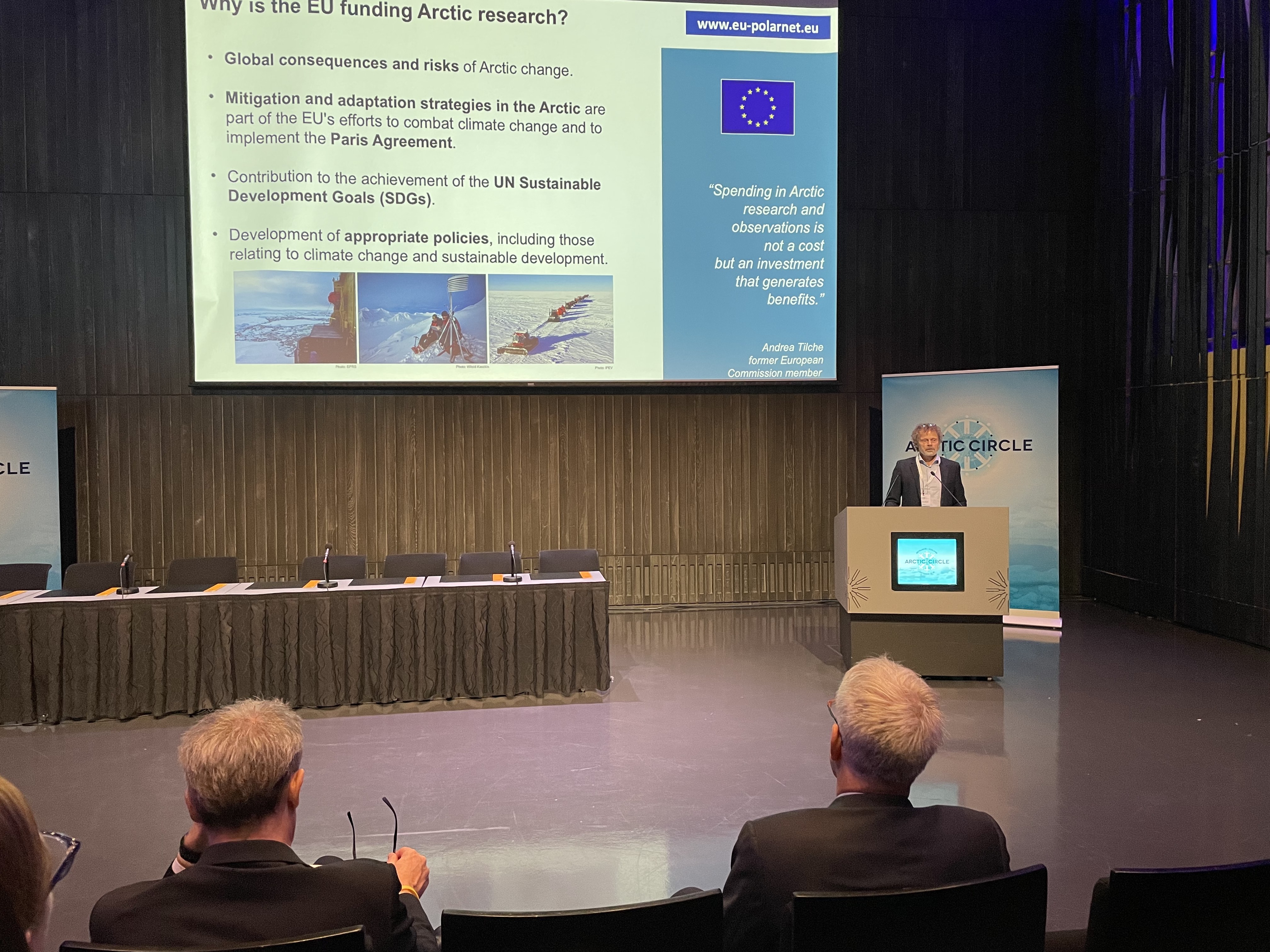 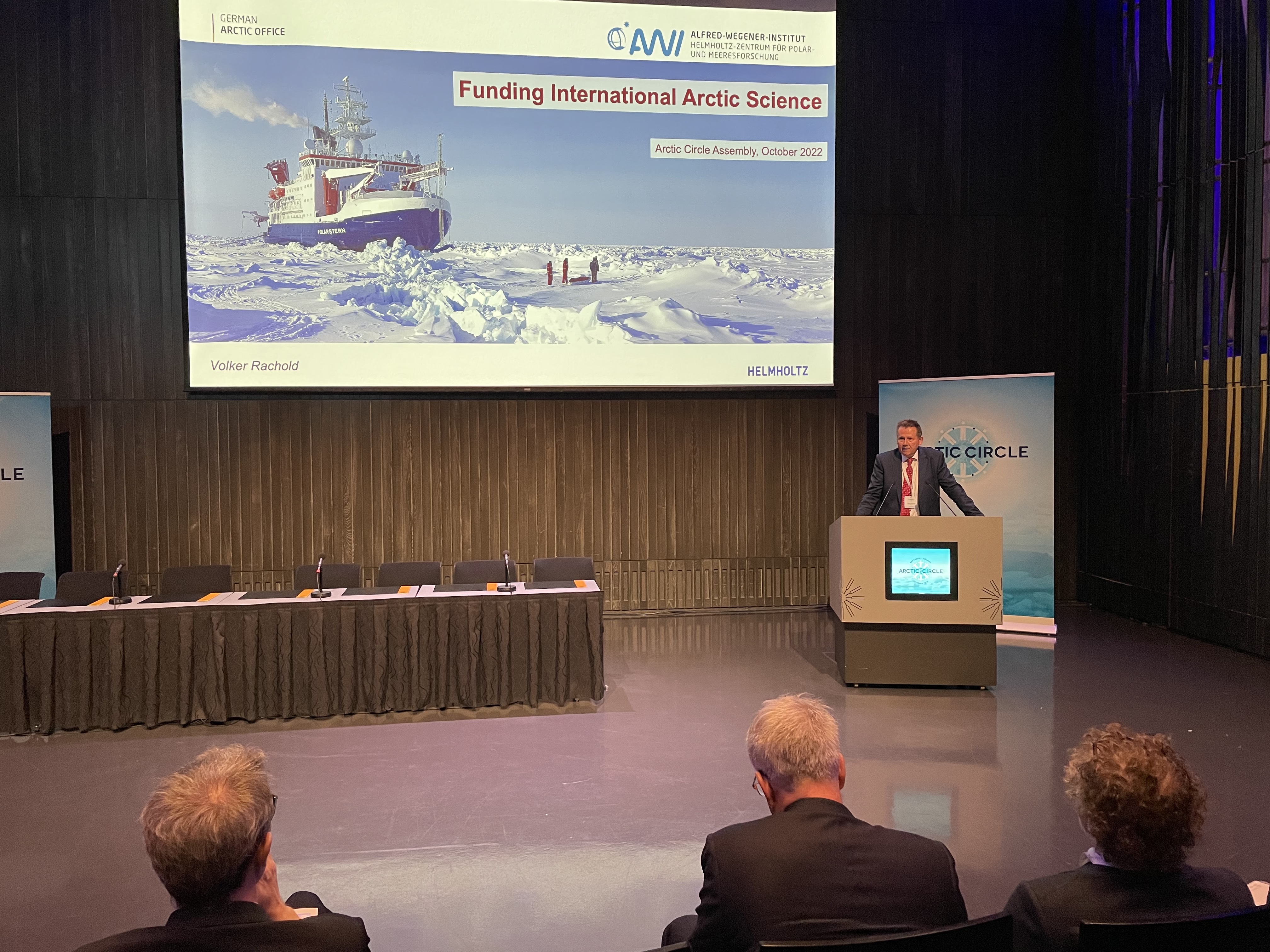 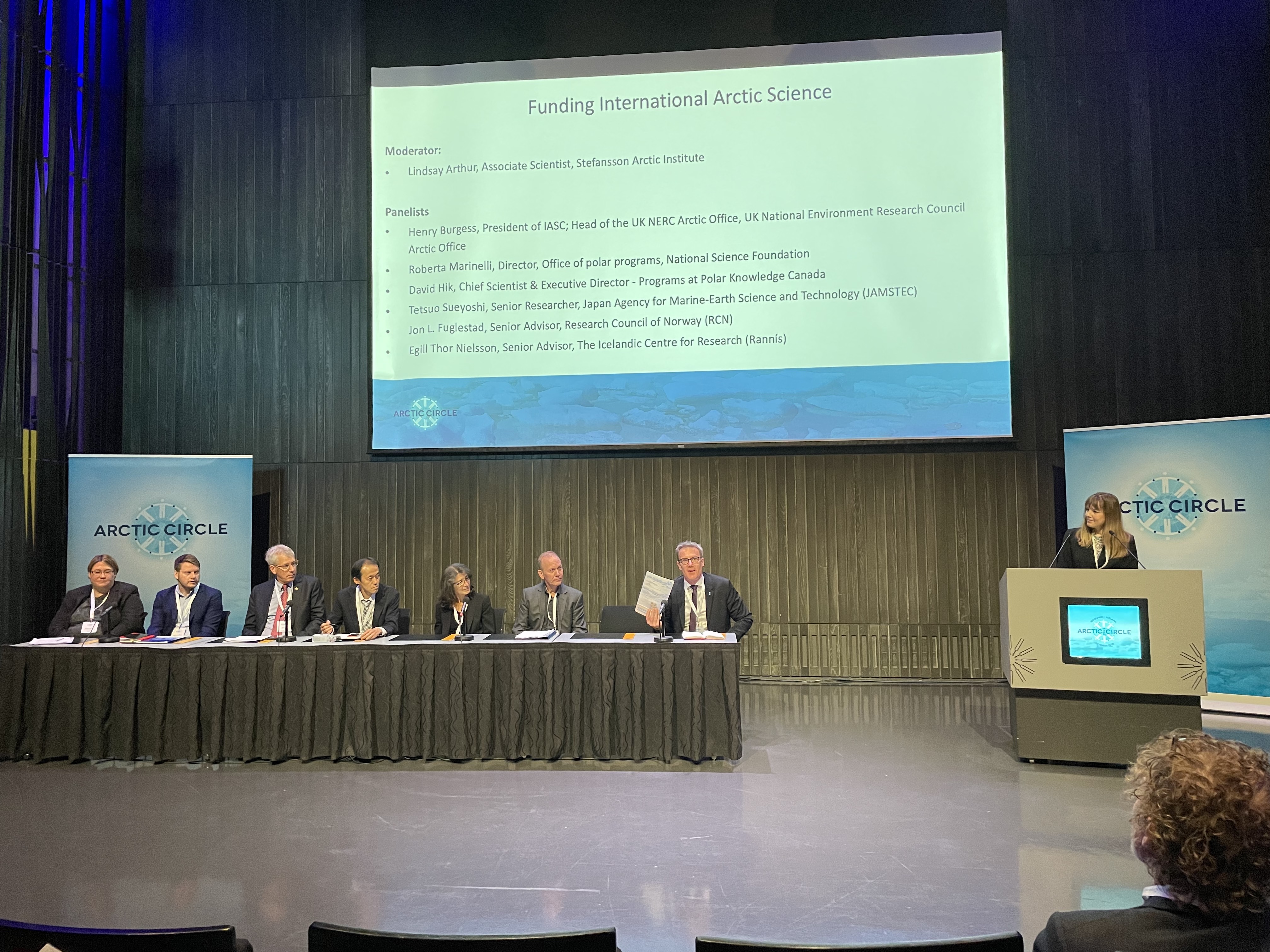 In cooperation with the Icelandic Centre for Research (RANNÍS) and the International Arctic Science Committee (IASC), the German Arctic Office co-organized a session on funding international Arctic science at the Arctic Circle conference in Reykjavík/Iceland on the 15 October 2022. Three short talks were followed by a panel discussion.

The session was chaired by Lindsay Arthur, Associate Scientist at the Stefansson Arctic Institute.

Jon Børre Ørbæk, Special Adviser Polar Research of the Research Council of Norway, gave the European perspective on the funding landscape and summarized the goals formulated within the new EU Arctic policy.

Volker Rachold, Head of the German Arctic Office and co-leader of Arctic PASSION WP7, reported on the lessons learnt from the past and the importance for combined international funding and coordination efforts in order to make big challenges happen, such as the expedition MOSAiC or the ChangingArctic Ocean program. To jointly address “big questions” initiatives such as the International Polar Year, the International Conference on Arctic Research Planning, the ArcticCouncil Agreement on Enhancing International Arctic Scientific Cooperation, and the ArcticScience Ministerials are important possibilities to bring big things forward.


A panel with Henry Burgess, Head of the UK National Environment Research Council Arctic Office and President of the International Arctic Science Committee (IASC), Roberta Marinelli, Director of the Office of Polar Programs at the National Science Foundation, David Hik, Chief Scientist and Executive Director Programs of Polar Knowledge Canada, Tetsuo Sueyoshi, Senior Researcher at the Japan Agency for Marine-Earth Science and Technology (JAMSTEC), Egill Thor Nielsson, Senior Adviser at the Icelandic Centre for Research (RANNÍS), Gerlis Fugmann, Executive Secretary of the International Arctic Science Committee (IASC) were then emphasizing the need for shared funding calls and that even small-scale fundings are powerful. Already bilateral or trilateral funding can make the difference. It does not need to have one common pot, but shared funding calls. The communication of international funding needs also helps national funders to direct their calls. International calls can be a good additional to national calls. It was also mentioned that the mapping of Arctic research is essential for the general funding ground.