The Atlantic Distributed Biological Observatory (A-DBO) is a comprehensive marine observing system for climate and environment under development in the Atlantic sector of the Arctic Ocean - one of the key gateway areas of the Arctic, currently experiencing rapid changes in climate and ecosystems.

Together with the pioneering observatory in the Pacific sector of the Arctic Ocean (DBO), and the recently established Davis Strait DBO, the Atlantic DBO will serve as an important contribution to the pan-arctic collaborative observatory network.

The fundamental incentive for the DBO sampling concept is to work toward better integrated observations across disciplines within dedicated areas of common interest and relevance. Due to the difficulty to automate biological observations in the same extent as e.g. physical measurements, there is still an imbalance in availability of data within different disciplines. The DBOs are, therefore, aiming to:

• Bring together all disciplines needed to understand the ecosystem functioning

• Increase the temporal data coverage within the focus areas

Arctic PASSION currently provides the means for increased coordination capabilities to establish the A-DBO and the common protocols for sampling, analysis and data sharing.

This webpage will serve as our main hub of information during the pilot implementation phase. From here you will be able to find contact info, access common documents, and get the latest information about our events. The implementation process is open to scientists and institutions with interest to collaborate in this region, as well as to end-users who will benefit from results from the A-DBO. 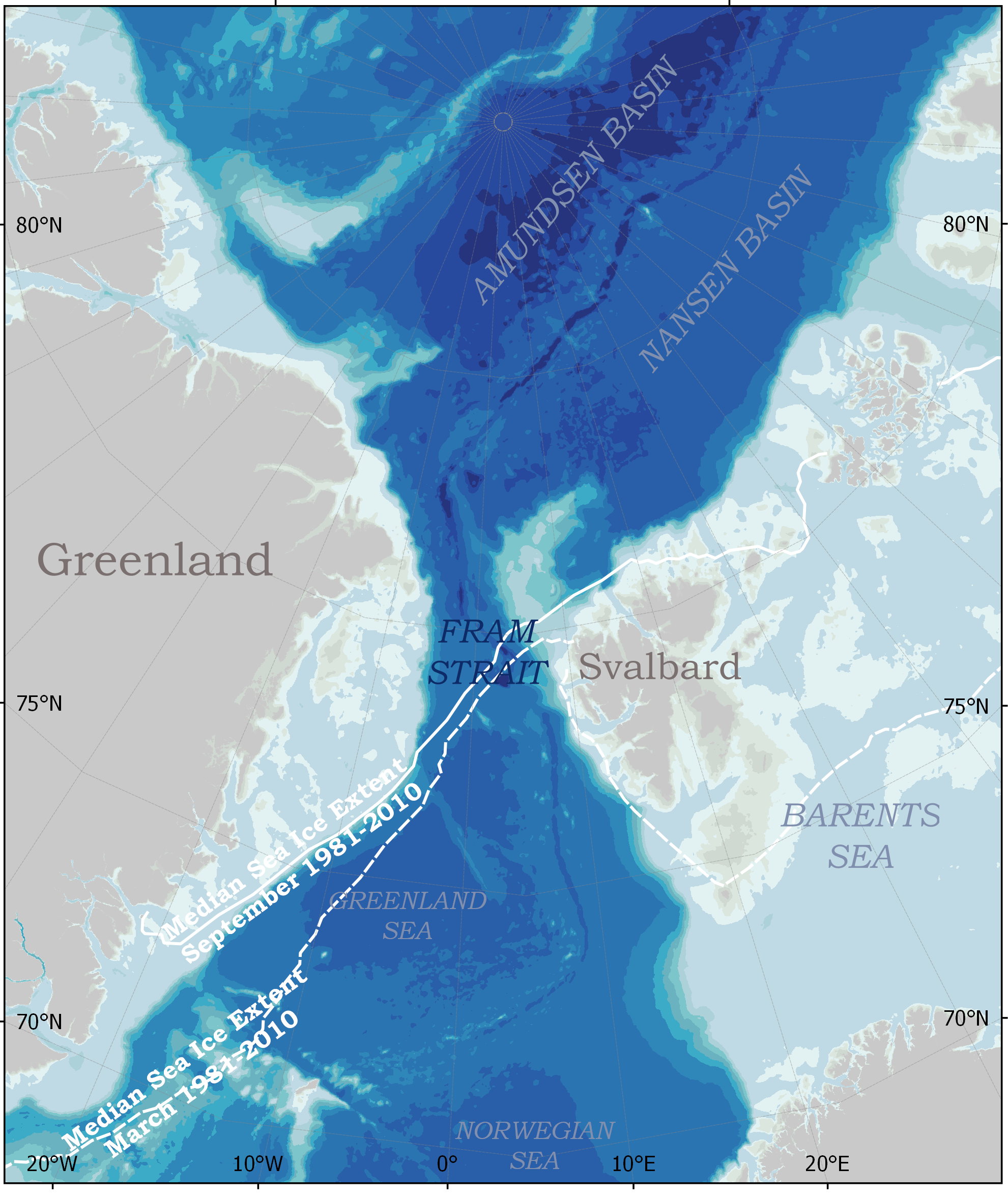 Bathymetric map over the Atlantic-Arctic gateway region, in which the A-DBO will be established. The white lines show the typical (median) sea ice extent for the months of March (dashed) and September (solid), based on a 30-year climatology from 1981 to 2010 as provided by the National Snow and Ice Data Centre (NSIDC).

Focus will be put on defining the fundamental spatiotemporal characteristics of the A-DBO and the associated core parameters to sample. We will also make time for planning of cruise activities in upcoming seasons, and for sharing provisional results and metadata from recent sampling activities.
﻿
The meeting is open to all who have an interest in joining these collaborative network activities. A detailed programme will be published in late September.

All DBOs (Atlantic, Pacific, Davis Strait) will be represented at next year’s Arctic Science Summit Week in Vienna, Austria:

The programme will be finalized in November 2022 and shared here shortly thereafter. For more information on attending ASSW, see the official ASSW2023 website.

A workshop was held during the Arctic Science Summit Week to invigorate the process initiated in 2016 to implement a comprehensive marine observing system for climate and environment in the Atlantic sector of the Arctic Ocean. With inspiration from the Pacific DBO system and existing long term observational programmes on the Atlantic side, discussions were initiated about priorities for sampling locations, variables, and methods as well as means of collaboration. A steering group was established to support the work of the executive team.

For a summary of the workshop, please see the meeting minutes.